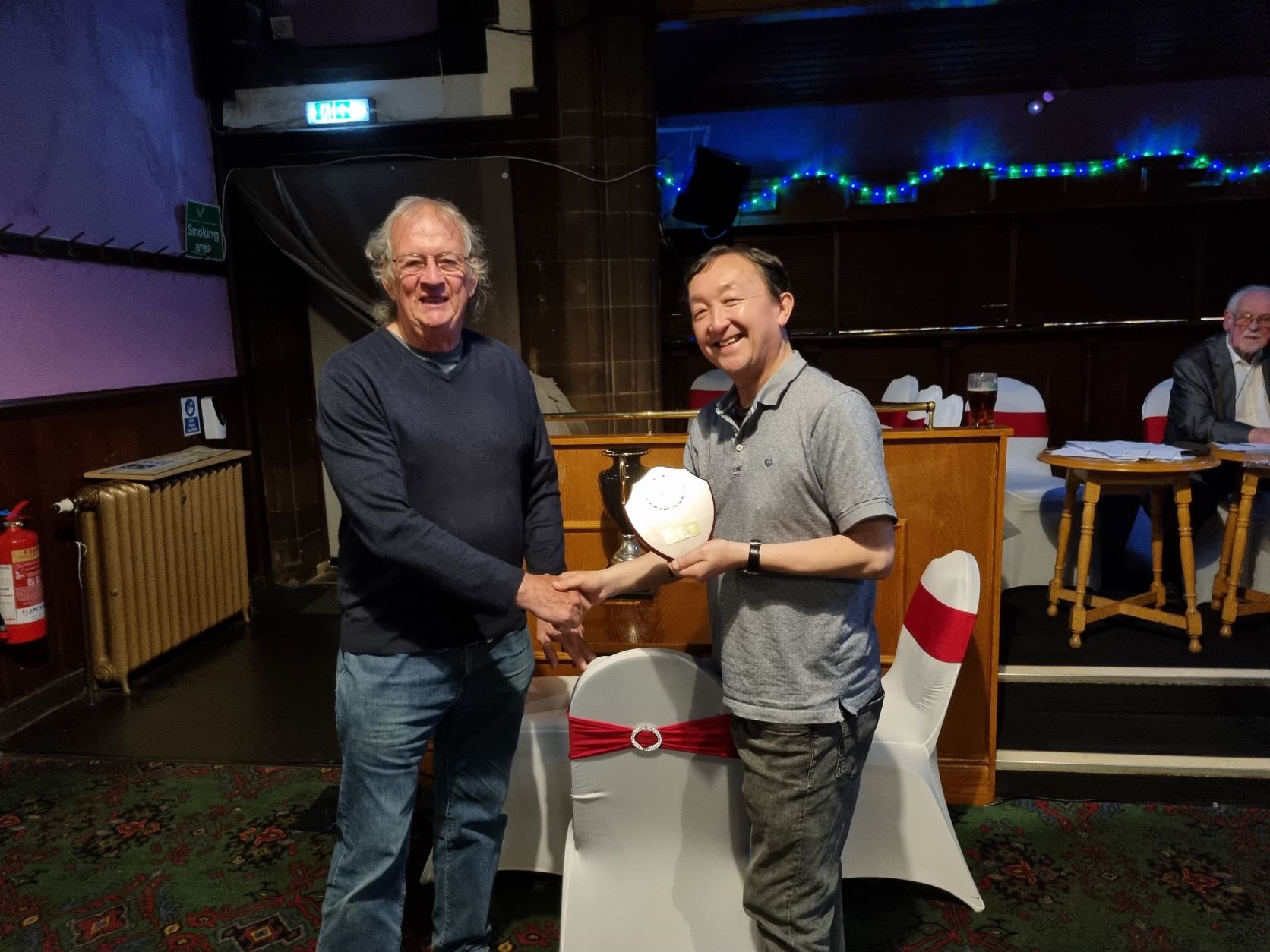 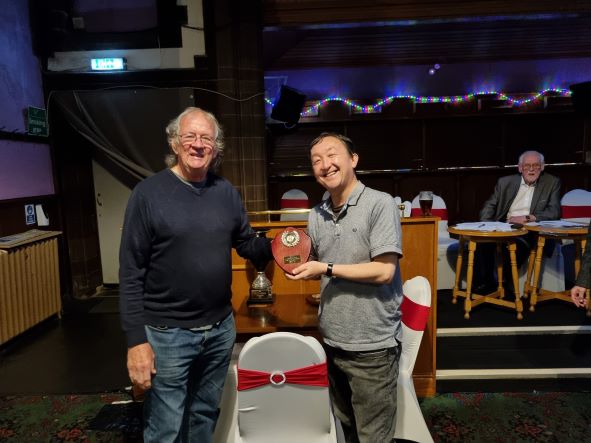 Steve Kee and I attended the Wirral AGM last night at Port Sunlight Social Club.  Steve picked up the shield for the champions of Division 1 for the 2021/22 season and Player of the Season in Div 1, with a score of 5.5 / 6.0.

Next season we will face competition from Chester, Wallasey and Northwich in defence of the title.

We are also drawn at home to play Wallasey in the Wirral Cup.

Matches will be on a Wednesday night, with 5 boards in Division 1 and 7 boards in the Cup.  Anyone who wishes to play in these matches, please just let me know.

“All things can tempt me from this craft of verse:
One time it was a woman’s face, or worse—
The seeming needs of my fool-driven land;
Now nothing but comes readier to the hand
Than this accustomed toil.”

I felt a bit sorry for Frodsham tonight.  They had previously allowed us to postpone this fixture on the day it was due to take place, since I could not get a team together, while the new date was only confirmed at short notice last week and in the event due to unforeseen absences resulted in a weakened side on the part of the hosts, which was a shame since it resulted in a match that was needlessly one-sided.  That said, all was not entirely clear until the final moments.

Neil Thorpe, making a return to Atticus this season, began in style checkmating his hapless opponent in fifteen moves.  Things were much closer of John’s board, where a London System led to an endgame where I felt John’s opponent, who was returning to competitive chess after a long break, was slightly generous to accept a draw.  Natasha showed her tactical nous to emerge a piece and pawn up out of the opening, and her technical understanding to convert this into a won rook and pawn endgame two pawns to the good.

My game was a curious affair.  In a Closed Sicilian, the first capture did not occur until black’s twenty-ninth move by which time we both had only 20 minutes before the time control, yet by this stage white was already much worse, with a poorly placed king, an eccentric structure and little piece co-ordination.  And finally Ben broke through with a combination after a see-saw game, though not before he had caused a few jitters by only registering very late in the game that he was a half-dozen or so moves from reaching the time-control as his clock dipped below a minute.

Thus we registered our third win of the season, which keeps us healthily in third place in the table.  There is one more fixture to fulfil this season on 8th April, at home to Wallasey, by which time I will have handed over the reins.  It has been an honour to captain this team.  In our sophomore season, our aim should have been to secure promotion.  Hopefully a new captain will be able to take up the cudgels to provide a keen and able squad with the challenges they require and deserve.

Getting the Band Back Together!

“Who taught me to dive into a dewdrop –

To nestle in a nutshell –

To gambol upon gossamer?”

A contest between two evenly matched teams took what appears a one-sided scoreline due to some very close games, which just happened to go our way.  An exception was Jim’s win against Adam Hodgson.  Jim trapped Adam’s queen on move ten, and spent the rest of the game giving back material in order to simplify into a won rook and pawn endgame.  Yet the pace of this game was similar to a blitz contest.  As I cast an eye on their scoresheet, they had sailed past thirty-five moves, while Liam and I were still on move twelve!

Next to finish was John Lawton, who create a supported passed pawn which was the decisive factor in another game which went all the way down to the endgame, in this case with king and pawns only.

Natasha had essayed a Reti, which as attests to the flexibility of this opening, transposed to a QGD.  She held a pawn advantage for the lion’s share of the game, yet the initiative seemed to pass to and fro.  The final position was agreed as drawn, with some justice, but a subtly nuanced contest.

We secured the match when Liam and I halved, and the final scoreline was given added lustre as Steve Philp punished a critical oversight by the otherwise solid Dave Ashton.

It was great to have Steve back in our line-up, and back in town for a couple of weeks.  Those who have not had a chance to catch up with him yet are encouraged to join us for a night of jollification and jazz in Frederiks Bar on Hope Street next Tuesday night!

We have now garnered nine out of the last ten points available, yet with only three more matches left this season, we may have to settle for kingmaker, since a sluggish start leaves promotion just out of grasp.  Yet the ethos of a ‘B’ team in the Wirral League is to provide opportunity for additional games for players in the ‘challenger’ bracket of the club, so if you feel you would like to take up the challenge, just drop me a line.

A Glimpse Into The Future

When the enterprising burglar isn't burgling,
⁠When the cut-throat isn't occupied in crime,
He loves to hear the little brook a-gurgling,
⁠And listen to the merry village chime.
When the coster's finished jumping on his mother,
⁠He loves to lie a-basking in the sun:
Ah, take one consideration with another,
⁠The policeman's lot is not a happy one!

Trying to get a team together in mid-December is difficult, rendered more difficult still by the restriction in allowing those under the legal drinking age into the Cross Keys after a certain time.  Thanks again to Wallasey Chess Club for once again allowing us to use their venue for this home fixture.  Yet, an incredible eight other players had confirmed they could not make the fixture, before l’arme secret finally picked up the phone to confirm I had a team.

That said, a game against Chester G, a team which seems to exist in order to showcase junior players, I imagined would be a straightforward fixture.  And so it seemed when I went a pawn up in the opening, again twelve year old Sam Burchett, who is his King’s School Chester uniform took me back to happy times of yore when I wore the same blue and green.

Natasha may having neglected sitting down to dine before leaving the house, since she started gobbling her opponent’s pieces like Cronus devouring his sons.  Jonny too looked to be in the box seat as he too went a piece up, yet it was Jim who was first to finish, when an otherwise equal game was ended abruptly by a discovery on his opponent’s queen.  By the time Natasha had finishing cleaning up the crumbs for a 2-0 lead, Jonny had tripled his opponent’s pawn, albeit in return for his piece advantage.  The greater challenge will be trying to persuade him he really should not be using Instagram during his games.  I may have to actually confiscate his mobile.

Seeing we were 3-0 up was a consolation, since my tyro opponent had by now warmed to the task. I began to regret declining not one, not two, but three pawns that I deemed “too hot”, since after rook, knight and queen began to swarm around my position, I was left to sweat bullets as my clock ran down to less than ten minutes to make ten or so moves and the position began to ratchet up.  Yet it is always darkest before the dawn, and an inaccurate continuation from Sam allowed me to trap his knight and the pressure evapourated.

That left just l’arme secret, who was only just entering the late middlegame in a Closed Sicilian against fourteen year old Nethuli Saram.  Ben had been in a tricky position, as he had to combat a kingside attack, where his king was, with queenside counterplay, where his opponent’s king was not.  Without both players down to their final ten minutes, post time-control, Ben showed his class and experience, to secure a five nil win.  A comprehensive win, but credit to Chester and especially their top two boards, who played way above their nominal rating.

A hard-fought match, with plenty of close battles. There was much fighting-spirit in evidence from Wallasey, which made the match score closer than it might have been. We had Andrej make his Wirral debut, but despite Andrej's searching attack, Dave's defence stood firm for the draw. Luke's positional acumen saw him convert a fairly small advantage into a winning attack. Ben looked like he was winning at some point, but his opponent found surprising resources which turned the game around in his favour. Even more dramatic was the draw on Sanjoy's board, as his opponent fought back to draw after being two pieces down. The match hinged on my board, and eventually a very tense central struggle resolved in my favour, and this tipped the match for us.

A jamboree chess evening at The Cross-Keys, hosting four matches and twenty boards, saw a pretty evenly-matched affair as far as grading goes. However, as they say in football, momentum is everything, and our team/squad continued it's good form with a convincing win in the crucible which is the Wirral 1st division.

Luke started the avalanche, saccing a piece to expose his opponents king, and the rest was history. I weathered some pressure but as the position opened up a similar attack was decisive for me. Jim managed to keep some tactical possibilities in reserve, and this created a win from a fairly even position. Ben demonstrated a nice balance between positional and tactical play in a convincing Sicilian, and had a won position when his opponents flag fell. Mike was a pawn up for what seemed like ages, but as his opponent appeared to be about to regain the pawn in the endgame a draw was agreed.

So, another excellent performance from our players, and our position in the Wirral League Division 1 is secure for this season!